Early Bird Gets the Worm

Early Bird Gets the Worm

It’s 5:30 in the morning, and the Santa Catalina village is still asleep. I walk out on my room balcony to check the wind. The moon is full, and the palm treetops on the hill are not moving which means dead wind – perrrrrfect. I hike down the pebble covered trail from my room at Cabanas La Buena Vida (an artsy yoga lodge in the heart of the Santa Catalina village), and jump on my bicycle, surfboard under my arm, over the speed bumps, rolling by the shuttered shops and café’s that line the road, nearly at the corner store, and my friend Kenny Myers texts: “Surf is firing at the point, get your butt over here now… EARLY BIRD GETS THE WORM!”

At that moment, my adrenaline spiked to levels I have not felt in years. The night before, there was all this talk around the village café’s about the swell hitting the following morning. For the past 2 weeks the surf had been head high and fun, but it seemed like most of the surfers around town were cringing to get some good solid tubes. The MagicSeaWeed.com surf forecast was predicting 7 to 8 feet for the next 3 days, which translates to double overhead plus surf for Santa Catalina. The last time I surfed anything like that was pre-children days (over 10 years ago) and I have to admit I was somewhat nervous.

As I pedaled my cruiser bike into Hotel Santa Catalina’s entrance gate (https://www.hotelsantacatalinapanama.com), I looked at my watch. It was 5:40 am, and the sun would not be out for another 30 minutes or so. Kenny was waxing up his 6’8” Boa (a Panamanian brand surfboard) as he walked down to the channel, waving at me to hurry up. Hotel Santa Catalina has this perfect paddle out channel right in front of the hotel, and I hate wearing booties or walking over reef, so Kenny had invited me to walk through his property to access the point. I tried to book a room at Hotel Santa Catalina the day before, but it was full and they recommended La Buena Vida as an alternative, which is great, although a 15 minute walk from the surf.

From Kenny’s infiniti pool, the view of the surf is spectacular, even at night, under the moonlight. The indirect lighting at the pool makes the place have this mystic vibe that is surreal. Kenny’s pool guy was up bright and early, he gave me a smile and waved as I watched the surf. Kenny was on the beach by this point wondering why I was not running to the paddle out channel. I began to stretch my legs, partly as an excuse, while I watched the surf, curious to see just what I was in for. A set appeared, and under the moonlight the first wave exploded over the reef and just peeled perfectly for about 300 yards until the wave fizzles out at this huge rock that meets the channel.

After doing 5 or 6 minutes of stretching, Kenny looked up at me as he was entering the channel to paddle out under the light of the moon. He waved again for me to hurry up, so I got up off of my down dog stretch pose, and hopped down the rock steps bordering the pool, to the pebble covered beach in front of the hotel. Some of Kenny’s guests had made a small campfire on the beach using driftwood that still had some hot wood coals and the euphoric smell of burning wood was enticing me to just sit on the beach and watch the surf show instead of paddling out to waves three times my height, but I didn’t want Kenny to think I was some kind of panzy.

Kenny is a legendary Panamanian-American surfer who was among the early pioneers who began surfing the point at Santa Catalina back in the 1970’s. Over last nights dinner Kenny gave me the low down on the history of Santa Catalina, which he could write a novel about, but in a nutshell Kenny was born and raised in Panama (to a Panamanian mother and an American father), and has been surfing Santa Catalina since he was in high school. The guy is fit as a whistle, eats nothing but organic foods, and you would think he was 20 by the way he looks and surfs, but he’s amazingly 61. Just a few years ago he won the bronze medal for Panama in the ISA (International Surfing Associations) Masters Category at the World Masters Championship in Santa Catalina where over 30 countries competed.

Another set came in and a surge of water pushed up the beach as the tide was rising, tickling my toes and feet with the most inviting warm water I have ever experienced in the Pacific Ocean. Being from Northern California, I am used to being greeted by the ocean with ice cold chilling water that is incredibly difficult to force myself into, but this was like a revelation for me. I began to question myself as to why I don’t live here in this tropical paradise, and immediately understood why Kenny is such a happy person – he is blessed with the most coveted spot on the point at Santa Catalina, with waves that rival those of Indonesia, and water temperatures of a spa bath. No wonder he wakes up at 5:30 am to paddle out to the surf in the dark.

As I paddle out chasing Kenny’s wake, I felt the swell growing with each set getting bigger and bigger. Paddling my thick 8’0” fun board under the moonlight, I quickly caught up to Kenny and asked if he ever sees sharks? He smiled and responded with “Only white ones. Nah, just joking. We never see sharks here.” With Santa Catalina being right on the Pacific Marine Corridor (the largest living reef on the Western coastline of the American Continent) and within spitting distance from Coiba National Marine Park, you would think that there would be more sharks around. But apparently not so much in Santa Catalina.

After a 10 minute paddle through the channel, we rounded the big rock and the size of the waves became more visible with the sun light rising over the Azuero Peninsula on the mainland and over the islands of Isla Gobernadora and Isla Cebaco to the east. The surf was solid. My knees trembled a bit with nervousness and my paddling became slower and slower, while Kenny’s became faster and faster, as a set wave thundered over the reef. I paddled over the next wave, and Kenny was in the take off zone, setting up to get slotted. He dropped, pulled in under a hefty lip, and the wave spit right in my face as I hooted Kenny on.

I watched from the shoulder, as the next 3 or 4 waves rolled by, studying the waves and the current, positioning myself to avoid getting caught inside. When looking at the shoreline, I wondered how far out I was, because it seemed quite distant, as the point wave is nestled in the reef just between the mainland and the Isla Santa Catalina, a small island that provides a perfect harbor for sail boats, yachts, and a dozen small fishing boats of the villagers.

After a few minutes, Kenny was back…“That was a freight train of a wave, just got a sick one.”, he said, with a big grin on his face. “You need to get in the pocket, follow me”, he said. I paddled to the peak, and a set was emerging from the horizon. We were still the only guys out and the sun was now peeking through the channel between Isla Gobernadora and Isla Cebaco. “You are up man, it’s your turn, GO!”, Kenny screamed, as a solid 10 foot face wave came at me. My heart raced, and my veins were filled with adrenaline, blood pumping. I turned, got into position, and paddled as hard as I possibly could. The peak was feathering, and I was lucky enough to get an easy drop on what seemed like a triple overhead wave. As I bottom turned, the reflection of the sun coming up from the east blinded me a bit, but the lip pitched and turned in the other direction. I rode that wave for what seemed like a mile, although it was probably only 200 yards. As I jumped off the wave nearing the channel, I could see two surfers paddling out near the shore after doing the reef dance from one of the nearby hotels.

We surfed the entire high tide, about 4 hours in total. I have not surfed 4 hours straight since I was like 18 years old. A small “panga” boat pulled up around 10 am with a hand full of local surfers from the village. “Time to call it a wrap.”, Kenny said, as he paddled for his last wave of the session. “Rolo and the local crew are here and they will take over the lineup. They all rip. That’s why I told you, EARLY BIRD GETS THE WORM, hahahaha.”, Kenny laughed as he kicked his feet to catch one of the best waves of the day, riding it all the way to the channel, and almost to the beach.

I sat and watched as these locals graciously ripped every last wave to shreds. The few tourists in the water slowly left the lineup, and the locals took over, just as Kenny had predicted. My arms were like jelly, tired from all the paddling, and I would have paid money to be pulled in at that point. A set wave came, and all the locals were on the inside. This was my opportunity to get a free ride in. I spent my last bit of energy paddling into the peak, got to my feet, and the wave folded over my head, covering me completely, while the local crew hooted at me with smiles… that was the wave of my life. I rode it until I reached the channel, and then dove into the warm ocean, and came up smiling at the sun and thanking the universe for an amazing session. The entire paddle in through the channel I was just in awe at the natural beauty of this majestic place, this incredible wave. 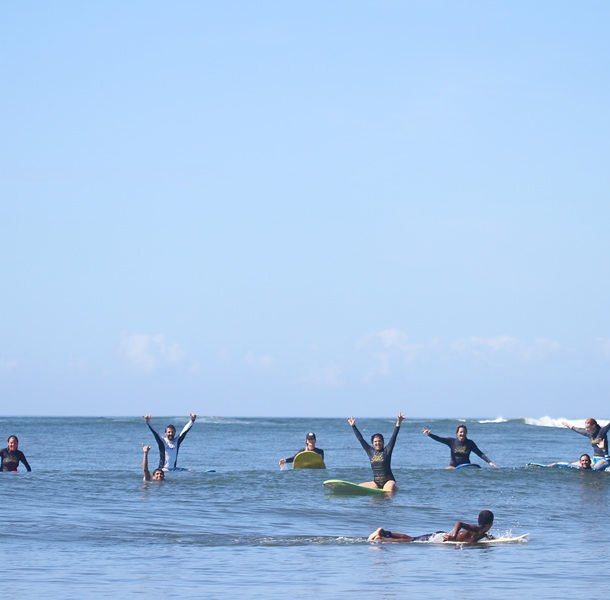 Is Santa Catalina Panama a good beach for learning to surf in Panama?
Next Article